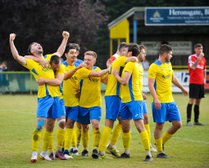 Planters progress further than ever before in FA Cup

Norwich United faced in form Mildenhall Town at Planation Park in the FA Cup on Saturday, Mildenhall came into the game having beaten Wroxham 2-1 away from home the previous Saturday whereas Norwich United arrived having won their previous 4 games in all competitions.

Norwich United had scored two goals in the opening 5 minutes away at Whitton midweek and they again established an early lead in this match, with Liam Jackson dispatching a right foot penalty into the bottom left corner of the net. The keeper went the right way but Jackson’s strike was right in the corner and hit firmly enough to give the keeper little chance of keeping it out.

Mildenhall equalised in the 18th minute as their small but nimble and skilful front two started to make their mark on the game but Planters regained the lead after 41 minutes when Sam Watts scored a deflected header from a superb corner delivery by Haydn Davis.

Norwich United were able to extend their lead further on 56 minutes when a jinking Haydn Davis run was finished off by defensive midfielder Dillon Alexander who smashed home from around twelve yards to score his first goal of the season.