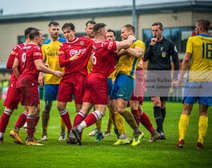 Norwich United had only progressed as far as the 2nd Qualifying Round of the world’s oldest cup competition before this season when they made history by reaching the 3rd Qualifying Round for the first time in the club’s history. The draw brought a trip to the impressive facility of Stamford AFC who are based over two hours drive away from Plantation Park.

For this reporter it was a first experience of travelling on the team coach to the game, offering a welcome opportunity to meet some fellow Planters fans and hear what the playing and coaching staff get up to on the road! A thoroughly pleasant trip up to the East Midlands, only slightly tarnished by some appalling music choices by the players!

Stamford’s newish, out of town ground is an impressive facility with adjacent 3G pitch and training ground, to go along with a nice ground, with one large seated stand at the side and a large terraced stand at the far end, offering something for everybody. This perhaps wasn’t the ideal day to visit though as rain lashed down throughout and the goalmouths were mud baths, at times the game was reminiscent of scenes involving Leeds United in The Damned United a film recollecting the mud soaked pitches and players of the 1970’s.

The bar had an impressive range of beers, including an actual range of real ales, almost a first on the non-league circuit for this reporter. The facilities were clearly impressive but did have that conference centre feel that goes along with such places, for those who will get the reference, it had a very similar feel to The Nest, but with great beer!

In any case the Stamford fans were friendly, welcoming and without any malice despite five of the Planters faithful few, including this reporter, depositing themselves slap, bang in the middle of a packed Stamford terrace, in order to hide from the incessant rain while still standing at the football. It was thoroughly appreciated that 100 odd Stamford fans did not object to a half dozen Norwich United fans singing contrary chants amongst them.

So, what a way to start, within a minute Sam Watts was wearing a half brown half yellow shirt having slide tackled early on in the treacherous conditions, within 3 minutes he had put Norwich United into the lead with a cheeky flick from a corner sending the Planters into dream world.

From then on Stamford pushed for an equaliser and Norwich United defended valiantly, throwing themselves into blocks, challenges and headers. It was a truly outstanding defensive effort that can only be conducted by a team who are united, organised and above all, committed to the cause.

On 36 minutes Stamford scraped an equaliser, after countless Dickerson saves the ball rolled through the mud and over the line, in similar circumstances a few minutes before, Mac Gee had headed the ball off the line while lying horizontal on it, but this time his only option was to handle as he wisely decided not to.

The second half followed a similar pattern to the first with the higher level Stamford creating more chances with their nimble frontline and Norwich United throwing bodies on the line to counter their every effort. Ryan Dickerson was majestic, pulling off save after save after save. Despite this Norwich United did create a fair few chances and did offer an occasional threat.

The mud and the rain only added to the drama of the occasion as both dishevelled sides fought for the right to progress to the next round of the FA Cup, I cannot over emphasise the mud and the wet and the ‘old school’ feel of the whole game, a remarkable advert for the real FA Cup.

In the end, of course, Stamford got their penalty. 95 minutes had been played. As ever the moan of the losing supporter was “where did he get 5 minutes from?” And “whenever a player goes near the keeper, it’s a free kick the other way” but alas, the penalty was given, Dickerson who had pulled out at least a dozen top class saves, was adjudged to have fouled a Stamford striker while punching the ball and the dream was over for this year as Stamford converted the penalty with aplomb, seconds before the referee blew for full time.