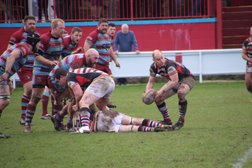 We lose 45 mins worth of drinking this weekend as kick offs go back to 1500 ! Good for some, sad for others.

Both sides come into this match after a rest week which has been very beneficial for our squad. Couple of lads back off long term injury were able to get some mins for the two's and boys carrying knocks have had time to heal.

Horden are a big set of lads and we will have to meet the physical challenge they provide head on. They will look to dominate the gain line battle with strong carries from their hard running ball carriers - we will have to chop down some big oaks on Saturday. I thought they played reasonably well against Stockton two weeks ago - dominating the scrum battle and putting them under real pressure at times.

Novos have only lost one game at home so far this season - to table topping Durham City in our last game at Sutherland Park. The group will be fired up to get back to winning ways at home and try go into the National Cup game vs Westoe in confident mood.

The squad is in pretty good health with the only major absences in the midfield as Jez Nash and Henry Wilson are still recovering from injury. Captain, Pete Twentyman will be joined in the front row by Josh Stacey who is off the back of a strong ball carrying game against Gateshead. In between them will be Daniel Shuttleworth who has been rested for two weeks to get ready for this game and Westoe.

The back five in the pack looks strong with Tom Cox coming back in to the group after two weeks out due to work commitments. He will partner Alex Littlefair who was outstanding against Gateshead - including making the final tackle on our line to get the win. Alex Cleminson has been given the nod at seven after seizing the opportunities given to him. The squad is delighted to see the return on Darren Kelly and Sean Ramsay to the back row. Darren has really impressed since joining us from Gosforth but has had a couple of weeks out with a shoulder injury. Sean has had a back issue and it is hoped that the pair will get back to the form they were in prior to their injury break.

Opportunities are given to Paddy Sowter and Rich Harrison at nine and ten. The pair were our regular starters before injuries to both players occurred. They played together for the two's last week to ensure they had mins under their belts going into this fixture. Both will be charged with controlling the tempo of the match and winning the territory battle.

Tom Winning and Ben Wollerton are paired together again in the centres to further develop on the back of a good showing at Gateshead. Tom made some try saving tackles and Ben scored an outstanding try. A well balanced partnership and we hope they will create time and space for the back three.

The squad is completed by Shaun Stewart, Mark Leckie and Lewis Chater. Shaun is having fine season playing almost every game and kicking well. Mark had a great performance for our two's on Saturday against Northern and deserves opportunities to nail down a wing spot in the first team. Lewis completes the trio and the Sutherland Park faithful will be eager to see him with the ball in space.

Finishers this week are Luke Menzfeld who had a big impact in this fixture earlier in the season - Adam McDonald and Tim Hart.

The club would like to congratulate Adam McDonald in his selection for Northumberland U20's last week against Staffordshire. Every county game should be cherished however an away victory is even more valuable. Well done Adam.

Unfortunately, an injury sustained by Euan Duncan has excluded him from playing in the Northumberland Under 20's this season. We all hope he returns to rugby after some time away from the game.