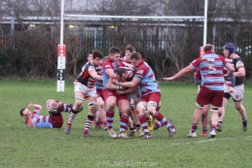 Novocastrians will look to home form as they try to upset Westoe in Saturday's league and National Cup double header.

Novos are only two points away from Westoe in the league but have been much further apart in recent matches. However, our home form (9 wins,1 loss) has been such that we will hope to prove worthy opponents. This fixture is a double header as it is the final match of pool play in the National Cup at Level 7. Both sides have defeated Old Rishworthians so it's winner takes all !

Westoe arrive at Sutherland Park in good form after much improved performances in 2019. However, they bring a much changed back line on this occasion which may offer us opportunities to explore. Although, our pack will have to fight tooth and nail to gain possession of Westoe's heavier pack.

We arrive at this fixture in a pretty good place - results wise we are 6-1 in 2019. An incredible achievement given the injury issues we have had recently. Last Saturdays win against Horden came at a price as Pete Twentyman and Luke Menzfeld have sustained possible season ending shoulder injuries. It has been great to see real squad depth at Novos this season as guys stepping in from the twos have been brilliant.

The front row sees Josh Stacey switch to tight head as in comes energiser Zach Weatherhead at loose head. Daniel Shuttleworth will sit in between the two in what has been an excellent season for the hooker. Chris Ward and Adam McDonald will lock down with an exciting back row finishing the forward pack in Alex Cleminson, Darren Kelly and Sean Ramsay. Kelly has been outstanding since his move to us from Gosforth. Sean Ramsay is having an immense season and will captain the side in Pete Twentyman's absence.

Paddy Sowter continues at scrum half after returning from injury last week against Horden. Once again he is partnered with Rich Harrison who will be tasked with winning the territory battle and turning Westoe around.

The centre partnerships have been a real plus this season in a position we have lacked depth in over recent seasons. Whilst Henry Wilson and Jez Nash have been out injured the current pairing of Tom Winning and Ben Wollerton have excelled. Gateshead and Horden struggled to contain the duo in the last two fixtures.

Out wide, Shaun Stewart, Tim Hart and Lewis Chater will be tasked with finishing anything that is created.