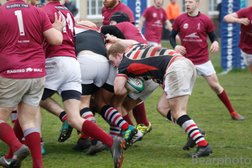 Novos embark on their shortest away day on Saturday as they travel the other side of the roundabout to Medicals.

A small amount of rotation this week as first team regulars Ben Merrett, Christian Selkirk and Jack Hearn are back in the starting line up. We have gone for more mobility this week expecting the game to have more width than our run out against Horden on Saturday.

We arrive at this fixture in a pretty good place due to back to back wins and some real competition for places within the group. There are some very good players who will be running out for the 2's on Saturday after missing selection this week.

The pack dominated this fixture last season and we will require a similar performance if we are to beat an in form Medicals. The front row is unchanged for the fourth game in a row although Luke Menzfeld is back and highly motivated to get involved asap. The rest of the pack is filled by back row players in the hope we can compete across the field.

In the backs we look forward to seeing Jez Nash and Jack Hearn play alongside each other as both are excellent communicators in defence. The back three were in fine form last week with all three scoring against Horden.

The squad are training in a bit more isolation this week and next with a real focus on getting positive results in our upcoming matches against Medicals and Consett.

Good luck to our other sides - 2's at home to Percy Park whilst the 3's join us at Medicals and the 4's take on Gosforth away. Yes - 4 sides out !!