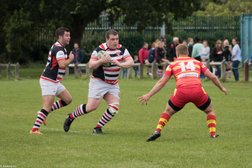 Three sides out this week with 1st and 2nd on a bus trip to Boro whilst the 3's take on Berwick at home.

Congrats on first start for Ross Radford (ex Gateshead) and returns to the squad for Luke Menzfeld, Ben Wollerton, Jez Nash, Jack Hearn and Alex Cokeley who were all unavailable last Saturday. In addition, well done to Paddy Sowter and George Waterhouse, promoted from the 2's this week.

Welcome return to our playing squads for Billy Porter this weekend. We hope to see him progress through the sides in the coming weeks. Congrats to Rich Zabrocki who has been asked to captain the side in Jack Pellew's absence.