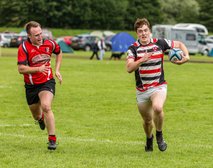 Despite the usual pre season unavailability a strong squad has been assembled with view to winning the Ringtons Cup on Saturday 1500.

There may be an addition or two at training this week as we wait on news from within the squad due to a few knocks. In addition, a few of our local uni boys are hard to track down at this time of year to confirm their availability !

In the pack there are notable appearances for Chris Ward who will want to show that he is ready to play week in, week out at first team level. Last season, he was often unavailable due to work commitments. In addition, Alex Cokeley gets an opportunity to play at six against his old club - Alex has been tackling everything during pre season at rightly earned his chance to shine.

Out wide there is a first team debut for Daniel Brewer, an incredibly talented prospect who has just finished Dame Allans School. Daniel was outstanding in the recent sevens event impressing the first team lads immensely. I look forward to seeing him play the game alongside Old Allanian Jack Hear who is back full time this year after securing a job after his degree at Oxford Brookes. We are also delighted to see Sam Bird on the wing and expect him to make a huge difference out wide during the season after his return from Loughborough Uni. Exciting times for Novos young back line.

Ross Radford will also make his club debut off the bench having put a shift in during recent training sessions.He will rightly be assessed in a high standard match so he can show his talents.

All in all - a strong squad for such an early pre season game. Amazing to see the strength of this squad given that players such as Kit Sorenson, Tom Cox, Sean Ramsay, Andy Hall, Alex Littlefair, Rich Harrison, Lewis Chater and Nick Bellamy are local lads not available. In addition, we look forward to the possibility of announcing 4-5 new signings during late August, early September.

Enjoy the beerfest and weekend rugby - Up the Vos !

Rugby for all, rugby for life.