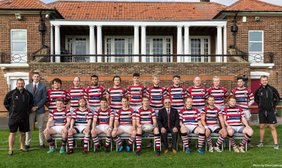 Not much to be said - Novos lost and were very unhappy with several elements outside of their control - on an even keel Novos matched their opponents for the 80 minutes but conceded 4 first half tries as decisions went against them. Medicals who have been doing very well in our league took full advantage of some generous decisions.

Novos fought every step of the way but couldn't combat the pressure that having to defend numerous penalties inevitably brings.

It was Meds 3rd win over Novos this season, fair play to them they have developed into a good team, however it continues to disappoint that they have 'supporters' who cheer injuries to opposition players and foul play (including a sickening late, late tackle on James Bass that should have earned a straight red card for the idiot perpetrating it and could have really hurt James.. This was also missed by the ref and 2 miked up touch judges so was one of a number of incidents of ugly foul play unpunished) unfortunately Medicals haven't got any better at winning with dignity as they continued the whooping and hollering - some in Novos players faces after the game. Its a shame - Meds used to be a cracking club with lots of good lads playing for them - win or lose they were always friendly and acted in the right spirit, That seems to have changed which is a shame. I remember winning games over Meds by 80 points and we never rubbed their noses in it - in rugby what goes around comes around and Im sure Novos will have a chance to even the scores again in the future.

With 2 games to go Novos will dust themselves off for a trip to promoted champions Darlington on Saturday before ending the season with a home game with Ashington which may yet prove a dead rubber.