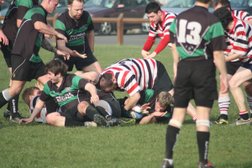 Any slim hopes of survival evaporated with Novos falling to a heavy defeat, a result that should secure Ryton in division one next season.

It could all have been different - Novos trailed just 5 - 0 until the last play of the first half and even for the first 15 minutes of the second half were still in this game. The effects of an at times torturous campaign though came crashing down on Novos when a soft score for Ryton opened the floodgates from 22 - 0 Novos lost the plot and suffered a heavy defeat and with it surrendered their status as a Division One club.

Joe Stamper who made his debut at scrum half was man of the match with the talented youngster getting around the pitch and distributing well throughout the game - he is a fine addition to our young squad.

In the last 2 weeks 60 players have made themselves unavailable for selection - Novos need to start the process of building toward next season and would urge as many players to make themselves available as possible for the final games as clearly the squad needs a boost going into the season end.

Novos now only have pride to play for with a cup game on Tuesday at home to Berwick and then a run up to runaway leaders Darlington on 14th and a final game at home with Ashington.

Watch this space for plans for next season.... we may have an announcement very soon on some very exciting developments that should - in theory mean that an improvement in Novos fortunes is on the cards.