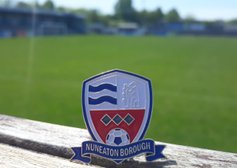 Nuneaton Borough are delighted to announce that local firm Patch Nation have supplied new pin badges for the forthcoming season.

“It’s well known that the Club was at death’s door earlier in the year” said Mark Lacrouts, Managing Director of Patch Nation “I’ve been a Boro’ fan for over 35 years so wanted to help out.

“It’s important to get some merchandise in the Club shop, allowing fans to get the merchandise that they want to wear the team’s colours with pride. We’ll be backing the Club next season by taking up a couple of sponsorship packages as well. We’re also reaching out to other clubs, to help with their own merchandising needs, but the Boro’ will always be firmly in mine and my family’s heart.

Commercial Manager Mark Grimes said "We're delighted to be working with Mark, it's another local firm that's supporting the Club and yet another positive step towards regaining our place at the heart of the community. The badges are fantastic quality and are available from the Club office now, at just £4.

"As well as the badges we're still selling the new replica home shirt for £35 as an early bird price ahead of the season and season tickets will continue throughout the summer. The away shirt poll was fantastically well supported and shows the appetite that the fans still have, even after such a turbulent season.

"We'll be announcing the winning shirt soon and hope to have them on sale in the next few weeks."