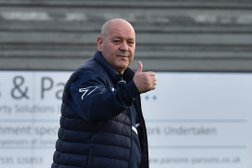 Club Secretary Mark Grimes has spoken in depth with Chairman Jimmy Ginnelly today as they continue to put plans together for next season and they would like to keep the fans updated.

We can confirm Jack Byrne has left the club as a number of National League clubs have already spoken to him about next season.

We believe that Telford are one of the clubs interested and that Jack wants to make the step up and play at National League level.

All of us at Nuneaton Borough FC understand this and wish Jack all the best for the future, wherever that may be, and thank him for his time at the club.

Right back Curtis Obeng has this week also left the club after his two year contract ended.

Curtis played most of last season out on loan at Ashton United and Grantham Town and we would like to thank him for the last two seasons with the club.

It is expected that Curtis will find a new club closer to his Manchester base.

With the gaffer now back in the building he has started to speak to the squad, one by one, about his plans for next season.

Off the field a lot of work has taken place.

Substantial building work has seen a fully equipped gym and physio room put in place which will be of great benefit to the playing staff.

Vital repair and maintenance work is continuing at the stadium and we thank everyone involved for their hard work.

Last, but by no means least, the pitch has received professional care courtesy of an EFL groundsman.

It is without doubt looking in the best condition it has for many years and will be the envy of our opponents next season.

Jimmy and Mark would like to sign-off by wishing the Boro faithful well, stay safe and we hope to see you at Liberty Way in the near future.