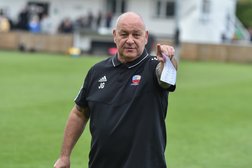 Following the disappointing 2-0 defeat away at the hands of St. Ives Town, Boro ended their winning streak of three consecutive games.

It was an extremely frustrating result where you could use the cliche, 'just one of those days'.

After full time, manager Jimmy Ginnelly was “frustrated with the result", adding "we've come to a tricky place and created 15 chances but not took one".

Ginnelly praised the opposing goalkeeper, stating Finley Iron had an "absolutely brilliant game in the first half, he really kept them in the game at that point".

Ginnelly added "it's always open for a smash and grab when you don't take your chances, and once again they've (St.Ives) done it really well”.

The second goal came from a Jordan Wright mistake but Jimmy Ginnelly was quick to defend the shot stopper saying "Jordan's been brilliant in the last 4 or 5 games, we were telling him at half time to keep his concentration levels high as in the first half he had minimal work to do".

Once St. Ives doubled their lead, Ginnelly said it "killed our chance to get back into it".

Nevertheless, the gaffer wasn't too downbeat about the performance because there were positive signs to build on.

The defeat on Saturday afternoon condemned Boro to another defeat on the road, the away form has been a constant obstacle this season but on another day, a first away win of the season could've been in the bag to help push the play-off fight.

Ginnelly insisted: "we could've won today, take just 2 of the many chances created and go in at half time 2-0 up, the game is then completely different in the second half".

"I said to the lads in the dressing room at full time that you can't beat yourself up, creating around 15 chances makes me a happy manager. The firepower is there, it’s just a bad day at the office".

Reflecting on the last 12 months he added "The fact that we're disappointed with this result just shows how far we have come, we didn't really have a club twelve months ago. The bigger picture is that we've come a long way, we've got superb support and ultimately we did play okay today".

Nuneaton are back in action on Tuesday night, the Southern League Cup fixture will see Rushall Olympic come to Liberty Way.

Ginnelly added "we just keep going, if we are creating them kind of chances every game we will win more than we lose. The attitude is right, the lads are down about the result but we will come again".