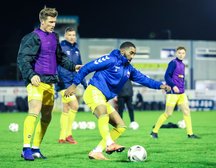 By Jamie Riley
4 days ago
Share via
FacebookTwitter
https://www.pitchero.com/clubs

Nuneaton host Rushall Olympic at Liberty Way on Saturday afternoon, it promises to be an exciting encounter.

Rushall head into the clash recently beating league front runners Banbury 3-2 in the cup making sure they are full of confidence. While Boro’s last match against Biggleswade was postponed due to a waterlogged pitch.

Cash admission via the turnstiles.

Rushall Olympic FC was founded in 1951, is a Southern League Central outfit that plays their football at the Dales Lane Stadium in Rushall. Rushall is a large village with a population of 11,871 (2011). Rushall is situated 25 miles away from Nuneaton with the Boro having already made that trip earlier in the season which ended in a disappointing 2-1 loss with The Pics grabbing a winner late on. Before the curtailment of the 2019/2020 season, Rushall Olympic was 5th in the league and threatened to go even higher. Then In the 2018/2019 season, Rushall finished just outside the playoffs in 8th.

The Squad:
Daniel Glover looks to be a problem for the Boro with his 12 goals this campaign. Callum Coyle also is a danger in attack with him linking up nicely with anyone he is placed next to. Rackeem Reid also is in great form with him getting a hat-trick in a 5-1 victory against Coalville just two games ago.

If you have any queries do not refrain from contacting us via our socials @nuneatonborofc.