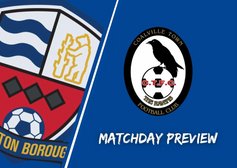 Here's everything you need to know before the Boro play Coalville Town tonight...

Tonight at 7:45pm we are playing an away game against Coalville Town at the Owen Street Sports Ground, where we will play, and fingers crossed the team come home with a major win after losing our game against Barwell who were 14th in the league table but are now 12th after making us come home with a 3-1 loss. This is our third away game in a row so hopefully we can have another away game where we come home with another win to celebrate with and to hopefully get us further up the table. If you’re unable to turn up to the game, we will be trying to post all the important updates on our twitter: @NuneatonBoroFC.

Tickets can be bought online or at the turnstiles on the day of the match [ https://coalvilletownfc.ktckts.com/event/coa2223h11/coalville-town-v-nuneaton-borough ]

However, we are encouraging you to buy your tickets online in advance. ‘Pay on the Gate’ will be possible via the turnstiles on matchday, with cash and card being accepted.

We are currently still 3rd in the table after losing Saturday’s game against Barwell 3-1 with Leiston still in 2nd with 38 and Tamworth in 1st with 39 points. However, Rushall Olympic are catching up to the Boro in 4th place, only 1 point behind.

Our last game against Coalville Town was an away was just slightly over a year ago on Saturday 4th December for 21/22 season, where we came home with a massive loss of 4-1.

The game immediately started off poorly for the Boro when Liam Daly scored an own goal, setting us up on a bad path, putting Coalville up 1-0. It only took Coalville 4 minutes to score their first goal of the match, putting them 2-0 up only 9 minutes into the game!
In the 34th minute, we scored our first and only goal of the day, from a penalty that Ben Midgley scored for the Boro, giving us some faith that we might win the game. 10 minutes later, 1 minute before half time, Leroy Lita had an amazing chance to equalise the game, but it got saved by the opposition. In the 45th +1 minute, Coalville scored their penultimate goal right before the half time whistle.
In the second half, Coalville scored their final goal of the game, pretty early on, in the 55th minute which was also the final goal of the day for both teams, meaning we lost 4-1 at full time.

Our last game was against Barwell on Saturday afternoon, which was an away game, unfortunately resulted in us bringing home the loss of 3-1.

The oppositions started off early with a goal 11 minutes in, a header from Rowley going straight into the net from the corner. In the 37th minute the offside flag is raised against Enoru. In the second half, we got given a penalty only 4 minutes in, which Beswick took and scored wonderfully, equalising the game. However, it didn’t take long for Barwell to fight back harder, scoring another goal from a corner in the 53rd minute by Master. The oppositions scored their third and final goal of the afternoon in the 87th minute as their number 11 beats Chris Cox twice before finding the corner.