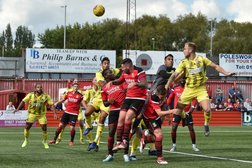 The dream of Wembley was dashed on Saturday for Boro fans when Tamworth came out 3-1 winners to knock Nuneaton out of the FA Cup.

Former Boro man Ryan Beswick, put the Lambs ahead from the penalty spot before Ahmed Obeng doubled the lead only three minutes later. Obeng, formerly of Leamington, has now netted on his previous two meetings with Nuneaton.

Tamworth’s Bilal Yafai made it 3-0 with a well taken strike from outside the penalty area which killed any chance of a Boro comeback. James Clifton did grab a consolation back for Jimmy Ginnelly’s side but there was little sign of an extraordinary comeback.

Throughout the game, Boro looked dangerous from set-pieces. Rhys Sharpe’s long throws and Ryan Edmunds corners troubled the Lambs defence, but none forced Jas Singh into a save.

It was soon 2-0 when Obeng skipped past Verma in the penalty area before blasting past Matt Sargeant.
The home side continued to press, winger Greg Kaziboni failed to keep his effort down before Jordan Gough’s arrowed strike was superbly tipped wide by the keeper.

Obeng nearly grabbed his second of the game immediately after the interval after Sargeant’s poor pass was picked up by the pacey winger. Fortunately for Boro his effort sailed over the goal.

It didn’t take long for the third to come though, Yafai placed past Sargeant into the bottom corner to give Boro a mountain to climb.

Callum Powell, who constantly seems a threat to defences, broke into the Tamworth area before picking out Clifton with a low cross to give the Boro travelling fans something to cheer.

The game could of ended so differently if Powell’s neat finish was not ruled out for offside, but the former Stourbridge man was denied by the linesman.

On a positive note, Boro did fight until the end but the hosts stood firm for the remainder of the game and comfortably secured their progress to the second qualifying round of the FA Cup.