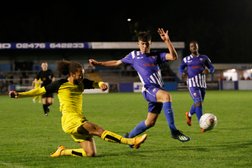 PRESEASON FIXTURE: League One Burton Albion to Visit the Boro'

Nuneaton Borough have announced that they will be hosting a Burton Albion XI as part of their preseason preparations.

The Brewers will visit Liberty Way on Monday the 29th of July 2019 for a 19:30 kick-off. The two sides last met during the previous season as Boro’ were victorious in a spectacular County Cup tie. With the Club deep in financial crisis at the time, Burton, very kindly, donated their share of the gate back to the Boro’.

To assist further, Nigel Clough, promised, and brought, a strong line-up, featuring no fewer than six players that went on to appear against Manchester City in the League Cup Semi-finals later that season.

Boro’ held a 2-0 half time lead, through Enoch Andoh and Courtney Richards, but found themselves trailing with 15 minutes to go as Joe Sbarra, Devante Cole and Marcus Harness all struck for the visitors. Dior Angus pulled the Boro’ level and Kairo Mitchell pounced in stoppage time to hand the hosts a 4-3 victory.

Further details will be announced closer to the time, alongside further preseason matches.