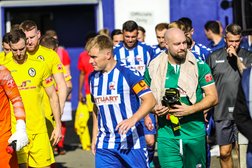 Here is all you need to know about tomorrow's clash against Peterborough Sports...

Nuneaton return to Liberty way against high flyers Peterborough Sports after a positive performance
in a close 3-2 loss to Coalville Town.

Peterborough is a city located in the county of Cambridgeshire with a population of 202,110 (2017),
It is most famous for its cathedral and in modern terms the recent success of Peterborough United FC.
Peterborough is situated 70 miles away from Nuneaton making it one of the longer journeys in the Central Southern league calendar. Peterborough Sports FC (the Turbines) was founded in 1908 originally being known as Brotherhood Engineering Works, Jimmy Dean took the reins for the
2015/16 campaign. In his first year the club won the title at a canter by a huge 21 points, helped by winning their first 23 games. The side also picked up the UCL League Cup, becoming the first side from Division 1 to ever do so. Season 2019/20 was to be spent in the Central Premier Division at
Step 3 for the first time in the club's centenary year and Sports were leading the way when the league for declared null and void due to COVID-19.

Dean has assembled a more then capable team to challenge for the league title with a total of 7 wins from 8 games, Peterborough’s top scorer this season so far is Dan Javis with him popping up with 5 goals so far during this campaign. One of Peterborough’s standout peformers has been Dan Lawlor with 4 assists and 3 goals helping Peterborugh sustain their status at the top of the league.

If you have any queries do not refrain from finding our socials @Nuneatonborofc.