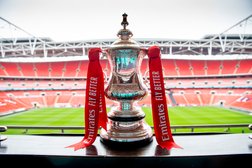 FA Cup football returns for Nuneaton this weekend with an A5 derby against Tamworth at the Lamb Ground.

Both sides come into the clash on wins as Boro defeated Lowestoft Town and Tamworth beat Hitchin Town. Debutant Greg Kaziboni struck twice for his new side before former Mansfield Town man Henri Wilder completed the rout for Tamworth.

Last time;
The last meeting between the Lambs and Boro ended in a 2-0 win for Tamworth. Current Boro men Callum Powell, Aman Verma and Joel Kettle started for the Lambs and it was Powell who scored the second. Connor Taylor had put the hosts ahead before the half hour mark before Powell doubled the lead six minutes later as Nuneaton suffered a defeat on the first day of 2018.

Jimmy Ginnelly’s verdict:
‘Saturday see’s us take part in the A5 derby. Tamworth is only about 13 miles away so the rivalry between the two sides is unbelievable. In this division, if you make it to the play-offs or win the league, you need to be better than Tamworth.

I would say both Tamworth and Nuneaton dreaded the draw. We both could of done with getting through some rounds before we clashed but the FA Cup is a journey. The winner is going to earn some cash and it will be a wonderful day for all supporters.

Our fans haven’t enjoyed any away success this season so we are hoping to do that against Tamworth.'

Please note that the game will be segregated.

If a replay is required it will be on Tuesday 10th September, 7.45pm kick-off at Liberty Way.