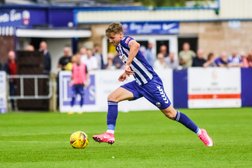 Here is all you need to know ahead of Tuesday's clash against Hednesford Town...

Nuneaton hit the road again with a visit to the Keys Park stadium to face Hednesford Town FC, the Boro will be hoping to return to winning ways after a close disappointing 1-0 loss to Rushden & Diamonds at Liberty way.

The Opposition:
Hednesford is a market town in the county of Staffordshire with a population of 17,343 (2011 Census). Hednesford is located 30 miles from Nuneaton. Hednesford Town FC nicknamed the Pitmen were founded on 1880. Hednesford possesses a rich and long history with some amazing FA cup runs with the likes of Middlesbrough, Cardiff and Hull city being their opponents. The 2012-13 campaign was one of the best in the history of the club, with the club finishing second in the league with 93 points and then gaining promotion through the Play Offs, beating AFC Fylde and then FC United of Manchester, the Final setting a new attendance record at Keys Park of 4412. The promotion to the Conference was complemented by winning both the Birmingham and Staffordshire Senior Cups in a truly historic season. The Pitmen now look to replicate the success put before them with a promotion back to the National League North.

Key Info:
Manager: Keenan Meakin-Richards
Stadium: PRG Stadium, Keys Park.
Nickname: The Pitmen
Previous Meetings:
30/04/2016- Nuneaton 3-0 Hednesford.
24/10/2015- Hednesford 2-4 Nuneaton.
The Squad:
Richards looked to improve his squad massively over the summer with a number of high-profile signings, it looks to have worked with Hednesford being currently unbeaten in the league going into the Nuneaton clash. Former West Brom youth product Chay Tilt signed from close rivals Redditch and looks to prove his ability which he has succeeded in so far scoring a late equaliser against Barwell last Saturday. Hednesford possess goals all around the pitch with there not being one clear goal scorer.

If you have any queries do not refrain from finding our social media @Nuneatonborofc.