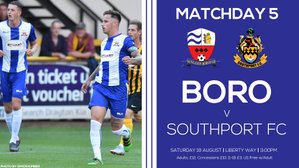 Boro' host The Sandgrounders on Saturday afternoon in important clash

Nuneaton Borough host Southport on Saturday, with big significance on this fixture as both sides are looking for their first wins of the season in the Vanarama National League North.

The visitors are in their second season in the league after relegation from the National League in 2016/17, ending a seven year stay in the division in which former Boro' boss Dino Maamria was Southport manager in 2015/16.

The Port finished 15th last season and current manager Liam Watson has overseen a difficult start at the Merseyside club, with four defeats from four games, and Watson has been vocal about his thoughts on his squad after his sides latest defeat to Chorley 4-0.

Boro' have the slight edge in past meetings, having won three of the last six meetings, including both games last season by 3-0 and 1-0 scorelines, whilst Southport's last victory against Nuneaton came in 2014 with a 3-2 win at Liberty Way.