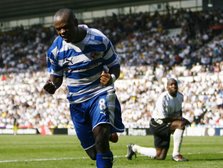 Quality by the Lita for Boro

By Kev Brown
3 days ago
Share via
FacebookTwitter
https://www.pitchero.com/clubs

Former England U21 and Reading striker Leroy Lita has signed for the Boro.

Manager Jimmy Ginnelly is obviously delighted to have a player of his pedigree on board.

Jimmy said "his partner is from Nuneaton and they’ve recently moved into a house on The Longshoot, which is just 5 minutes from the ground, so this is a win-win situation for both parties."

"These sort of players don’t come onto Nuneaton's radar very often so we moved quickly and obviously all of us here at the Boro are very excited."

"Me and Leroy had a good old chat about football and life in general and we finally got to talking about him joining the club."

"The main thing that he seemed to understand was that this move wasn’t about money and it was a breath of fresh air to sit with a new signing that isn’t trying to hold the club to ransom for the most money he can get. He simply wants to give some of his footballing experience back to his local club."

"Hopefully he can give the players and our fantastic supporters the benefit of his England U21's and Premiership skills."

He began his career at Chelsea where he was part of their youth set up before he moved on to Bristol City.

The forward was signed for Reading by Steve Coppell in a £1million deal in July 2005.

An impressive 14-goal tally in Reading's 2006/07 Premier League campaign sparked calls for him to be called up by England, but they ultimately fell on deaf ears.

In July 2009 he signed for Middlesbrough and spent two years on Teesside, scoring 20 goals before a £1.75m move to Swansea City.

He also had loan spells at a number of league clubs before ending his professional career with spells in Greece and Thailand.

Leroy was capped 9 times by England Under-21's and scored 6 goals for them.

Welcome to the Boro Leroy.