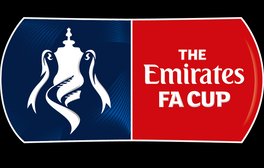 Edmunds played a instrumental part in last weekend’s 4-1 win over Lowestoft Town at Liberty Way and believes it is important to take that form into the visit to Tamworth.

‘It is crucial we take Saturday (against Lowestoft) into the game against Tamworth this week. I think everyone saw Saturday what we are capable of as a team, especially in that first half’.

Saturday will see the Boro begin their FA Cup campaign and will be hoping to improve on last season, which saw Brackley Town knock the club out this time last year.

However, this year’s opening game will see the first A5 derby of the season, something Edmunds is looking forward to.

‘Derby games are always exciting. The fact that we are playing in the FA Cup against Tamworth adds that extra buzz. After last week, there is a good feeling about this game, and everyone has been bouncing at training. I think everyone at the club is excited for it.’

Edmunds is no stranger to this famous competition either. His strike for Coleshill against Bromsgrove a few years ago has appeared on social media since and it sticks with the winger.

‘One memory I have from the FA Cup was when I was at Coleshill. We beat Bromsgrove Sporting 4-3 and I scored probably the best goal of my career. Later that year, my name was on the ball for the final of the FA Cup.’

Despite Boro only picking up one point in three away games, they will be hoping to send fans back down the A5 with a smile on their face having secured a place in the next round.

‘After Saturday’s performance we should be confident. Our team alone builds confidence, because when you look at our team on paper it is good enough for this league and could compete in the division above.

‘Everyone is eager and excited to get the result for the club and fans.’