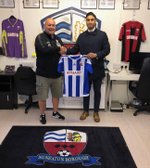 “I’m delighted Aman has chosen to sign for us” beamed Manager Jimmy Ginnelly “I’ve tried to sign him a couple of times in the past but never really been able to get him to join me at Barwell, but as Aman said to me, he’s played against the Boro’ in the past and he understands that Nuneaton is a massive club and wants to help us get back up the non-league pyramid. He’s going to be a massive part in that in the way he understands what we need. He’s a very intelligent guy and hopefully his great attitude around the changing rooms will rub off on the other lads.”

“I’m very happy to have finally signed for Nuneaton” said Verma “I was close to signing for the Club when they were in the conference. I’ve played against the Boro’ many times over the years and have enjoyed playing at Liberty Way. Hopefully we can hit the ground running, with the staff and players that we have, and aim for the playoffs”

Verma, who was born in Leicester and came through the Foxes’ Academy, dropped in to non-league football but a string of impressive performances for Bedworth United and Redditch United saw Leicester City come back in for the powerful midfielder.

After several loan spells Verma was again released by his home-town Club. A season with Kettering Town included a loan spell in the National League with Mansfield Town and was followed by a move abroad.

Aman was tempted to Malta where former England Captain Mark Wright signed him for Floriana, where he scored four times in fourteen appearances. Upon returning to England, Verma spent brief spells with Kettering Town and Stockport County before joining Corby Town for a season, scoring seven times in 21 matches.

Two seasons with Kidderminster Harriers preceded a stint at Torquay United before spending the past two seasons with local rivals Tamworth. Aman made over sixty appearances for the Lambs, scoring six times.

Welcome to the Boro’ Aman.