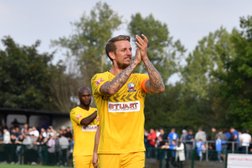 Manager, Jimmy Ginnelly said “I would like to say a massive Good Luck to Carl Baker who has decided he wants to further his football career in the dugout! Carl as been an excellent player for us at Nuneaton, his performances have been electric to watch and he’s been very instrumental in our wins we’ve had this season especially the FA Cup tie away at Lichfield Town FC, which was a special moment for Carl as he was on the pitch at the same time as his son Louie and I’m sure one he’ll always remember.”

Jimmy continued “Carl had been struggling with his on and off long term calf injury that was hampering him getting fully fit for games and when the call came in from Telford United to become their next Assistant Manager it was too good an opportunity for him to turn down.
So after having a meeting with me and my staff we could tell he was very excited about the prospect of being on the management ladder we mutually agreed to help him by not standing in his way and agreed to rip his contract up with Nuneaton Borough FC so he was a free agent.”

“Good luck Carl, we’re very sad to see you go but I would never stand in any players way who’s looking to better themselves in football.” - Jimmy Ginnelly

From all us here at the Boro, we’d like to wish Carl all the best for future & thank you for your time whilst at the club.