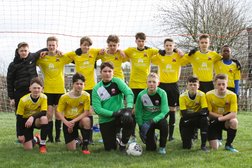 Boro' Under 14's gain creditable draw in first ever match...

Following a hugely successful trial session on the previous Wednesday, 1st May, the Under 14's took to the Liberty Way pitch for a very competitive match on Saturday the 4th of May against a well-established Coventry Copeswood side, who are also entering the MJPL next season for the first time, with the game ending 0 – 0.

"Some of the players had never experienced playing in at a set up like the Boro' before" said Manager Simon Wright " so that was a great experience for them. We also, as a management team, saw it as an opportunity to give the trial lads a good run out, whilst looking at the players that have already made the squad, and trying a few things that we may not do on a normal match day."

"Overall the trials and match have been a great success" added Assistant Manager Tim Steele "we're looking forward now to finalising the squad for next year and pulling on the Boro' shirt next season as a squad."