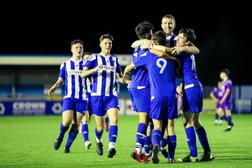 Boro welcomed Kidsgrove Athletic to Liberty Way for a FA Youth Cup tie, and what a rip roaring cup-tie it was.
The game was only a few minutes old when Boro struck first, great work down Boro’s left saw a ball whipped in and well finished from close range.

Possession wise the game was fairly even with Boro slightly on top.

Boro extended their lead with an absolute screamer from 30 yards out that flew into the top corner.
With their tails now up Boro added a third in the 25th minute with a header from a corner going in off the post.

Kidsgrove hit back immediately with a well taken goal to give themselves a lifeline.

Suddenly, from being in complete control at 3-0 up Boro came under sustained pressure but got to half time 3-1 up.

Early in the second half the Boro keeper made a superb save to keep his side two goals ahead.
Kidsgrove were now in control and when they pulled another goal back it really was game on.

Boro were now defending for their lives and showed real grit to repel the visitors repeated attacks.

Then in the 80th minute a rare break gave them the breathing space they needed.

A long through ball found its way to the lone striker who beat two players before flashing a fantastic finish into the top corner.

That seemed to knock the stuffing out of the visitors and Boro saw the game out without any further scares.