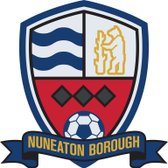 With the recent Trials having 65 players in attendance the numbers were whittled down to 24 for the first Friendly for the New Look Under 21's section.

The Boro lads were split into two sides which allowed the Boro Staff to monitor each player closely
The first half the Boro had the better of the opportunities but just couldn't seem to beat the Nomads keeper and the frame of the Goal.

Nomads took the lead after a well worked move but the Boro' soon responded.
Boro then went 3-1 ahead with two quick fire goals.
Nomads with five minutes to go replied themselves with two goals, one being a fantastic drive from 25 yards.
Final Score 3-3

Overall a draw was a fair result and there were a lot of positives to take from the game to assist in reducing the numbers further in achieving a squad for the forthcoming season.