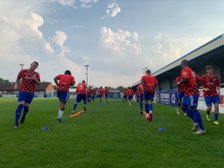 Nuneaton Borough got more minutes in the tank on Thursday evening as they beat Leicester Road 3-0 to win three of their four friendlies.

The home side started better last night but a flurry of Boro substitutions proved to be the killer for Leicester Road. Goals from Ryan Edmunds, Ravi Shamsi and a trialist handed the victory to Jimmy Ginnelly's men.

The game was pretty flat until the sixth minute. An incident between a Leicester Road player and a Boro trialist meant there were sparks. Referee Jacob Lehane ordered both players to be substituted to avoid any red cards.

Following the altercation between the two players, there was a high tempo to the game. Both sides were providing strong tackles and full-blooded aerial battles. Our first chance of any note came just shy of 20 minutes. Marcus Kelly lofted a free-kick from wide into the box but there was no one there on the end of it.

The home side were enjoying themselves after the drinks break. Their left-hand side was dominant and they used this as a regular outlet.

Claudio Dias was breaking things up for us in midfield. A new addition to the squad ahead of this season, he was preventing counter-attacks and linking defence to attack alongside Kelly.

A trialist on the right-wing was our best form of attack in the first 45. He was giving their left-back a hard time. The link-up with Luke Benbow seemed our best chance of breaking the deadlock.

There were wholesale changes in the second half. Seven changes meant it was practically a new side. The second half started well. The passing was better, the tempo was higher and there was more fluidity.

Edmunds, one of the changes at half time, opened the scoring after 52 minutes.
A trialist played the ball to 'Eddie' before he arrowed one with his right foot. The goalkeeper was left rooted to the spot as the attempt hit the back of the net.

Tony Breeden was called into action on the hour mark. The Boro's number one read the shot as he got down low to keep the ball in his midriff.

Edmunds was seeing a lot of the ball since coming on at the interval. He had moved to the left flank since his goal, providing in-swinging crosses. This was proving to be a difficulty for Leicester Road.

The home side put Boro under a spell of pressure and it almost proved to be successful. Their winger thought he had a golden opportunity before Jordan Armsden threw himself in front of the ball to keep the clean sheet intact.

The game slowed down with 15 minutes remaining. We were awarded a penalty shortly after when Edmunds burst into the box from wide left and was fouled in the area.

Shamsi took the penalty and dispatched it with ease, sending the goalkeeper the wrong way for his second goal of pre-season.

We were now getting into our stride again and we made it 3-0 with six minutes remaining. A trialist surged into the box before finding the far right corner. The low effort left the goalkeeper with no chance.

The night proved to be an excellent workout against a very competitive Leicester Road side.