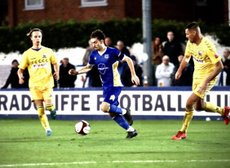 Radcliffe are through to the second round of the Buildbase FA trophy for the first time since 2004, after leaving it late to defeat a battling Nuneaton Borough side.

The first-half began with Radcliffe starting on the front foot straight away as they looked to carve the Nuneaton defence open from the get-go, however the away side stood firm in their approach when pressured by defending well for large parts of the game.
Preston-loanee Jack Baxter thought he’d opened the scoring after twenty minutes, only to be denied an opener by the fingertips of Tony Breeden. The 21-year-old created an angle for himself to flash a wonderful effort towards goal from 25 yards out, it looked to be heading for the far corner but the goalkeeper pulled off an outstanding save to tip it around the post.

The best chance of the half for Radcliffe came in the dying moments before half-time, as Chris Taylor couldn’t make the most of a glorious one-on-one opportunity to find an opener. Jack Baxter was again involved, this time turning provider as he pinged the ball over to Chris Taylor who was waiting free on the far side after the Nuneaton defence failed to pick him up. He took his time on the ball before sending a fierce shot straight at Tony Breeden.

Minutes into the second-half Nuneaton were awarded a great chance to get the opening goal after a mix up at the back led to Cam Belford picking up the ball from a Radcliffe pass back. Leroy Lita took the resulting free-kick inside the box but Simon Lenighan put his body on the line to throw himself at the ball to stop it from reaching the net.

Ten minutes later, Jean-Louis Akpa-Akpro buried his head in his hands as he missed the best chance of the game to get himself on the scoresheet. Matty Crothers whipped a delightful ball into the 36-year-old at the back post who nodded towards the net but his effort was just wide of the post with the goal at his mercy.

Substitute Carl Baker looked dangerous when he came onto the pitch and he nearly scored a stunning goal but for an even better save by Cam Belford. The former Coventry man found space and hit a fierce shot from distance which took a deflection off a Radcliffe player. It looked to be heading into the top corner of the net but Belford adjusted his body enough to get a hand to it to send it over the bar, certainly one for the cameras.

That save became even more important just two minutes later as Radcliffe finally opened the scoring with a bit of magic by Jean-Louis Akpa-Akpro. Matty Crothers clipped the ball into him, he plucked the ball out of the air to take it down and strike into the bottom corner to claim his fourth goal of the season.

With Nuneaton attempting to keep their FA Trophy campaign alive they had a series of late set pieces but produced no clear chances. Radcliffe wrapped up the victory in added time. Substitute Luca Navarro wriggled past two Nuneaton players before shooting low into the bottom corner past Tony Breeden.