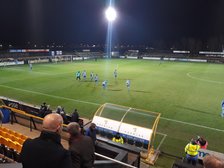 Hosts snatch a point at the death...

Nuneaton Borough snapped a run of four straight defeats as they earned a 1-1 draw away to Southport. Yusifu Ceesay Ceesay scored on his debut but the Boro’ couldn’t hang on for all three points as Jordan Archer snatched a stoppage time equaliser.

The early portion of the match produced little from either side, though debutant Ceesay showed some good touches and willingness up front. Jack Sampson will feel he should have done better when he found himself alone on the edge of the area with just Cam Belford to beat, the towering forward pulled his effort wide of the post though.

Boro’s best efforts came in the form of long-range shots from Carl Baker and Lee Hildreth. Baker fired in a rasping volley that was deflected wide, whilst Hildreth pushed his effort over the bar from a long throw-in by Rhys Sharpe.

Ceesay worked himself some space around the 20 minute mark and shaped to shoot but put his effort high. Belford pulled off a miraculous save in the 26th minute. Dion Charles escaped down the right and picked out Bradley Bauress in the middle. The forward didn’t catch his shot cleanly but it looked certain to creep inside the post until a diving Belford clawed it away and the Boro’ were able to clear.

Ceesay was again causing the Sandgrounders defence problems but dragged his effort across goal wide of the right-hand post. Dan Hanford was equal to another Baker effort, again firing in a stinging drive from a corner, the Southport shot-stopper managed to tip it over the bar. The first half finished goalless but both sides would have felt that they could be in the lead.

Charles had the ball in the back of the net for the hosts, early in the second half, but he had already been flagged offside, a hotly debated decision amongst the home support. From the resulting free kick Boro’ broke as Devon Kelly-Evans found Ceesay in the box and the lively forward turned his man and shot across goal to mark his debut with aplomb.

Southport responded well and dominated large stretches of the final thirty minutes. Belford had to find an incredible save to deny Jason Gilchrist with twenty minutes to play, the top-scorer in the division last season found himself through on goal with only the Boro’ Captain to beat, but Belford was equal to the effort, reacting with lightning-quick reflexes to stop the goal-bound drive.

Boro’ looked to have weathered the storm but Southport threw everything at them in five minutes of stoppage time, Belford getting down well to save from Dean Winnard, but unable to do anything as the ball dropped kindly for Jordan Archer, the substitute rifling the equaliser in to the roof of the net.

On reflection it was a good point away from home, against one of the divisions form sides, but with the equaliser coming in the 93rd minute Jimmy Ginnelly would be forgiven for thinking that it was two, valuable, points dropped.

Nuneaton return to action on Saturday the 12th of January when they host Curzon Ashton. Tickets are just £5 for Adults and Concessions, and just £1 for Under 16s. Kick-off is 15:00 at Liberty Way.