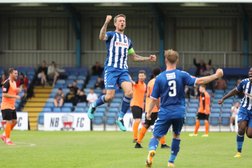 Boro came from behind to grab a well deserved point with a 92nd minute equaliser in an exciting opening day fixture against Biggleswade Town.

Liberty Way was bouncing at the full-time whistle after two wonder goals from Jordan Goddard, either side of a goal from skipper Carl Baker, secured a point for the hosts in a 3-3 draw.

Nuneaton started the game on the front foot but couldn’t convert their possession into clear chances.
They were punished for this in the 13th minute when a corner was allowed to go all the way across goal and was smashed home at the far post by former Cambridge United man Sam Squire.
The visitors looked to extend their lead just five minutes later but fortunately for Boro the effort flew wide.

Boro were bossing possession and moving the ball around nicely but the final ball let them down on a number of occasions.
Carl Baker was close to restoring parity in the 28th minute but his effort whistled past the post.

Boro kept up the pressure and were eventually rewarded in the 36th minute when Jordan Goddard collected the ball in midfield before driving forward and releasing a thunderbolt from the edge of the box that flew into the top right corner.
HT: 1-1

The second forty-five started almost identical to the first with the home side looking in control, confident and likely to get a goal.
This was almost the case five minutes after the break when some good work down the left led to Tom Armitage driving down the line before squaring the ball to Lita, but his shot agonisingly went inches past the post.

On the hour mark The Waders almost took the lead against the run of play when their forward went round Smith in the Boro goal but Kettle snuffed out the chance with a great tackle.

Eventually the deadlock was once again broken in the 71st minute when Baker received the ball and struck a low driven shot from 28 yards out that flew into the bottom right corner, putting Boro 2-1 in front.
However, only four minutes later the Waders were level as substitute Muyembe lobbed home his effort from the right hand side of the box.

Boro continued to press and McCrory was the next player to see a shot just go the wrong side of the post with ten minutes left.
Things then took a turn for the worse for Boro in the 85th minute when Blake D’Arcy’s effort from outside the box curled into the top corner past a helpless Smith, making it 3-2 to the visitors.

Nuneaton threw everything at the Biggleswade defence and deservedly got back on level terms in the 92nd minute when Goddard tried his luck once again from outside the box and his effort flew into the top right of the goal to the elation of the Liberty Way crowd.
Boro still had time to carve out several chances, all to no avail, before the full-time whistle sounded.
FT: 3-3