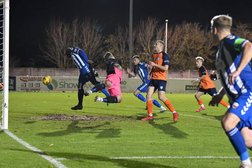 Another night of high drama at the Arden Garages’ Stadium saw the Bards triumph 4-2 over Nuneaton in a topsy turvy encounter ensuring a winning start for new manager, Tim Flowers. Missing from a familiar line up were Fry(injured) and Isaac(suspended) while Jack Storer made his home debut. For the visitors ex-Reading star Leroy Lita was a starter.

The Bards lined up with three at the back, with Dawes and Wilson playing left and right, and Lafferty slightly withdrawn. Stratford attacked the Knights’ Lane end with a stiff breeze at their backs. For 30 minutes there was little action of note as a game of pedestrian pace was played out in midfield. There was one good passage of play between Dawes and Sammons that saw Ahmed’s dangerous cross hacked clear. The first moment of real excitement arrived on 33minutes when Obeng, chasing a seemingly lost cause, forced keeper Foster to slice his clearance. Dawes was on it in flash and as he shot for goal a despairing Nuneaton defender got back to send the kick for a corner. Grocott’s dangerous inswinging corner caused panic in the Nun’s defence and Storer forced home from close range,

As the game opened up and two minutes later Grocott found Obeng in space to the right and just outside the area. Obeng took one touch and hit a brilliant low drive across keeper Foster the ball sailing into the bottom corner. Obeng was to depart the fray shortly afterwards but not before earning a penalty for the Bards. As the ball bounced high in the Nuns’ area following a Stratford corner Obeng was felled by a very high boot as he went to head the ball. He was immediately replaced by Andoh.  Grocott made no mistake from the spot as the Bards headed for the interval with a healthy three goal cushion.

It was always likely that the strong wind which had helped the Bards’ cause in the first half would benefit Nuneaton in the second; and so it proved. For fifteen minutes there was nothing in it until a simple long ball caught out the Stratford defence and Dwyer finished expertly. From that moment the Bards were under pressure and a second Nuneaton goal swiftly followed. Edmunds forced O’Brien into a brilliant save leading to a corner. From the corner McCrory’s deft header was helped into the corner of the Stratford net by Lita.

The next twenty minutes saw the Nuns continue to press as the game was fractured by a series of petty offences with the Bards trying to slow the tempo of the game. An eerie hush descended on the Arden Garages’ Stadium on 82 minutes when it was clear that keeper O’Brien was seriously injured following a goal line clash with substitute Luke Benbow. It was generally agreed that there was no malice in the Nuneaton striker’s challenge. With O’Brien on his way to hospital it was a strange way for him and his watching family to ‘celebrate’ his 30th birthday. Liam and Michaela will be much in the thoughts of the Bards’ family in the coming days.

Louis Beresford sprang from the bench and his effervescent confidence helped the Bards through the final minutes including 14 minutes of stoppage time. Dawes was combative all over the pitch and while busy in defence the frustrated Edmunds seemed to draw his studs down the Bards’ wingman’s calf earning the unrepentant defender a straight red. The riposte was very sweet as with the last kick of the match Dawes forced keeper Foster into an error and there was joy unconfined as the fans’ favourite made it four for the Bards.