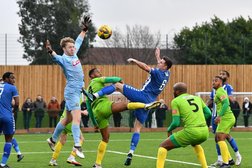 Boro fought back from two goals down to earn a point at Barwell and could have claimed all three but for a stunning save in the last minute by home keeper Max Bramley.

Boro started brightly in the opening 10 minutes or so, moving the ball well and creating problems for the home defence. Dan Bradley and Cain Noble saw early chances go begging with the visitors on top. After this bright opening Boro somehow allowed Barwell to take control of the game for the remainder of the half to devastating effect.
The home side took the lead in the 14th minute with their first meaningful attack. Hesitation in the Boro defence left Ben Stephens free to head home an excellent cross.
Barwell now had a firm grip on the game and looked as if they would score every time they attacked.
With Boro pegged back Breeden made a couple of smart saves and Barwell missed several good chances before the inevitable second goal came. With 37 minutes gone Ben Stephens surged forward and hit a crisp strike that arrowed into the bottom of the net.
With 43 minutes gone new signing Charlie Dowd replaced Cain Noble who limped off after an awkward challenge.
HT: 2-0.

The opening exchanges of the second period saw Barwell threatening a third through Ben Stephens but Breeden made a smart save to deny the in-form striker.
Debutant Dowd then began to pull the strings for Boro and it was now the visitors who were the side on the front foot and looking increasingly dangerous.
Bradley shot over the bar and a succession of dangerous corners heaped pressure on the Barwell defence as Boro gave their large travelling support something to cheer.
With 65 minutes on the clock the pressure told and a moment of brilliance from Dowd gave Boro a lifeline. He drove forward down the left before unleashing an unstoppable low drive that flew into the bottom of the net.
The returning Kyle Perry came on a minute later for his debut as Boro looked to tighten their grip on proceedings. Just three minutes later, in the 69th minute, the visitors were level. A great delivery into the box found the head of Dwyer and he did the rest leaving Bramley in the home goal helpless with a well directed finish.
Boro now looked the more likely to go on and snatch a winner but a mixture of good goalkeeping and wasteful finishing kept the scores level. As Boro poured forward Barwell threatened a couple of times on the break but it was the visitors who almost stole it at the death. Substitute Luke Benbow pounced on a loose ball in the area but his fierce shot was superbly saved low to his left by Bramley in the home goal.

Boro showed great heart to haul themselves back from 2 down and, in a distinct game of two halves, they almost claimed all three points.
FT: 2-2.