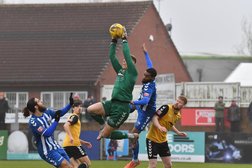 Boro held on to a vital point against Rushall Olympic in a frustrating day at the office. They were left feeling a little disappointed after a goalless affair at the Advanced Machining Stadium. Both sides struggled to take a firm hold of the contest in a game that looked as if it could go either way.

It was Boro who had the first real chance of the game after 6 minutes when Kyle Perry had a header cleared off the line. Six minutes later the visitors snatched at a chance and it went wide. Boro’s next chance came when Charlie Dowd’s storming run down the right wing led to the playmaker cutting inside before unleashing forceful cross towards the back post that was cleared only as far as Kaziboni who collected the ball and tried his luck only for his effort to drag wide.

The visitors responded quickly as with 15 minutes on the clock they came close when a cross from the right found Batchelor alone in the box. His acrobatic effort couldn’t stay down and flew over the bar.
Two minutes later and Rushall threatened again but a dangerous cross was cleared by Boro.

With 35 minutes gone Breeden got down well to make a good save from Coyle.
On the stroke of half-time Rushall had a penalty appeal waved away and the half ended all square.
HT: 0-0

Only 5 minutes after the restart, Rushall nearly found themselves ahead when a ball found it’s way to Batchelor in the box. The captain took the ball down before attempting to get a shot off from only a few yards out but he couldn’t make full contact and the ball rolled into the arms of a relieved Breeden.

Boro hit back after 54 minutes but a brave block prevented a fierce shot from finding the net.

In the 59th minute the best chance of the game came and it was for the away side. A cross from the right found the head of an unmarked Reid at the back post but his header was superbly stopped at point blank range by Breeden.

That proved to be the last meaningful effort of the game with both teams defending well until the final whistle.
FT: 0-0