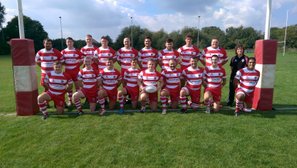 Old Eds back on Track!

Any thoughts that this was going to be an Eds romp from the start were quickly dispelled by a game Pinley outfit.
Within two minutes the struggling Coventry side were 5-0 ahead through a try at the end of a flowing attack but after that Eds' superiority was apparent and an eventually convincing win saw them settle in second place in the table behind Stratford.
Eds' haul of tries began soon after with winger Jack Grubb touching down in the corner for scrum-half Brad Darlaston to land an impressive conversion.
Full-back Jake Holder was next on the scoresheet and Eds were now ahead at 12-5.
Pinley were by no means out of it and fought back with a try after an Eds attempted clearance was charged down - 12-10.
Eds seemed to be still suffering from the effects of Christmas excess and some sloppy passing among the backs hampered progress.
However, they got things sorted out and Holder scored his second try out wide.
Another great Darlaston conversion took the scoreline to 19-10 at the break.
The try of the game soon after the resumption when Eds winger Dan Elkerton got possession some way out.
His powerful run took him past several despairing tackle attempts and he completed his run with a well-deserved try - 24-10.
Home spectators grew restless as the game entered a protracted spell with play confined for long periods around the Pinley 22.
It had become something of a penalty-punctuated stalemate until Grubb made it 29-10 with a try wide out.
Then, as the wintry sun sank slowly behind the railway embankment, Eds forwards put in a powerful push for the Pinley line and skipper Phil King grabbed the try. Darlaston converted, not long before a shrill blast of the referee's whistle brought a conclusion to proceedings

Before the game a minute's silence was observed in memory of keen Old Eds supporter Rod Holes, who died shortly before Christmas.
Rod's son, Stuart, played for the Eds for many years.