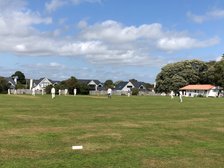 Enjoy if you can this summary of the dramatic encounter which unfolded on the Sussex coast last Sunday....

Sunday 15th August saw the arrival at the charming seaside village of Ferring of a Nuthurst XI that could be generously described as being “highly experienced”. The presence of young whippersnappers Raggy, DT, James Simpson and Simon Whitehouse pulled the average age down below pensionable, but that is not to say this was not a team packed with talent. Jonny Willis made a welcome return after his fetlock injury, and 2021 Tour Virgins Trevor Boughton and Rahul Jobanputra were reunited – this time without their eBay nun outfits.

The weather was bright and breezy but still quite warm, and once we had finally all assembled after driving past the tucked away entrance to the ground a few times, Raggy strode to the middle and promptly got off to a winning start with the toss. Given Raggy’s passing resemblance to the great WG Grace both in beard and talent, it was no surprise that he elected to bat.

Raggy and Jonny were first up with expectations of a big opening stand, however, after a steady start, Jonny was adjudged lbw by umpire James Simpson for 8, dismissed by Ferring opening bowler Williams. Tour legend Trevor was in at 3, but his visit was brief – out caught for 1, again off the bowling of Williams. When Raggy was out shortly after for an uncharacteristic 10, the Nutters were in a bit of bother, causing Jeremy James to clear his throat and ask if he could borrow some pads….

Fortunately for everyone except Ferring, there came a period of consolidation as Rahul and Jonty carefully rebuilt the innings with some attractive shotmaking. Rahul was particularly brutal, smashing anything short through midwicket and square leg. Jonty eventually succumbed for 21, bowled by that man Williams. David Thompson then picked up the mantle as Rahul’s foil and with the help of customary nifty footwork between the wickets, the scoreboard rattled along. With the Nuthurst innings now in a decent position, DT cut loose and started to play more expansive shots and was eventually bowled by Da Silva for 28.

This brought your correspondent to the crease and after a brief stay which included an almost 6 to very deep backward square off the begoggled Patersonnnn (spelling lifted from the Pitchero scorecard – maybe someone dozed off and leaned on the keyboard?), he was returned to the pavilion as Patersonnnn wreaked his revenge with a tasty inswinger. James Simpson entered the fray and with his stylishly correct and effective batting, soon reached 20. He was run out attempting a second to a tremendous throw from the deep which broke the stumps with a direct hit. James sportingly applauded this superb piece of fielding as he made his way back.

With only a few minutes before the end of our allotted time, Chippy Prior joined Rahul and made a quick 11 before falling to Patersonnnn with the penultimate ball of the innings. Simon Whitehouse went out and scrambled a single off the last ball, leaving Rahul 70 not out and Nuthurst with a respectable total of 182-9.

With the weather starting to change – still breezy but much cooler with threatening clouds – Nuthurst took to the field with Raggy behind the stumps, cementing our reputation as Sussex’s premier destination for specialist wicketkeepers. Chippy and James opened the bowling but did not have much luck as the Ferring opening batters King and McSporran (Scottish – surely?) moved the score along towards three figures. After half an hour, it became apparent that the run rate needed to be controlled, so in a shock move designed to upset the batters’ concentration, Raggy passed keeping duties onto umpteenth-string wickie Jonny “The Talking Gloves” Willis and took the ball himself to deliver a spell of his accurate and effective off-spin. This paid quick dividends as King was out bowled for 43. Patersonnnn joined McSporran and together this pair continued to add runs. Then came a pivotal moment when McSporran lofted a hoik seemingly over the head of Chippy at wide mid-on. Chippy with a few elegant strides and a leap, plucked the ball out of the air one-handed, to much wonder and celebration. The batsman detoured his trip back to the pavilion to shake Chippy’s hand and congratulate him on a superb grab.

Nuthurst suddenly felt they had a chance and when Patersonnnn was run out with a brilliant direct hit from James Simpson, confidence started to grow. Burgess survived some very hearty appeals for lbw as he swung across the line to Raggy, but tried it once too often and ran out of luck, after making a quick 25. Another McSporran was run out for 5 with Jonny flattening the stumps in his haste to remove the bails, and Da Silva was bowled by Raggy for 10.

Ferring had entered the final 20 comfortable and looking for 4 an over with plenty of wickets in hand, but now they were hanging on. With 10 overs to go, your correspondent was thrown the ball and kept the runs down with a few oohs and aahs as the ball drifted past the outside edge to allow Jonny several opportunities to practice his juggling act. A notable event in this period was Chippy leaping right on the boundary to parry the ball on the full back into play whilst in mid-air turning a probable 6 into an unlikely 2. Ferring now needed an equally unlikely 17 to win off the last 2 overs and, after a short debate, it was decided your correspondent could be trusted to deliver. Only 3 runs came from the over, but more importantly another wicket fell as Chippy threw to the bowler’s end and your correspondent in his excitement knocked a bail off before the ball arrived. Through the mists of time, I recalled having to pull the stump from the ground to effect the run out, but needed Jonny to bellow the finer details of Rule 27b sub-rule (iii) several times before the ball was held against the uprooted stump. Fortunately, the batsman had given up, so the run out stood.

Nuthurst hearts were in mouths as Raggy took the last over to see the first ball land on the pavilion steps for a big 6…all of a sudden Ferring had a chance again! Runs came from the next 4 balls with Ferring needing 4 off the final ball. Of course, Raggy’s steely nerve held and Ferring finished just 2 short on 180-7.

PS @Charlie South – there were 13 byes off our bowling, so I think you’re safe!
PPS @James Simpson - Chippy is clearly after your crown as current ace fielder.