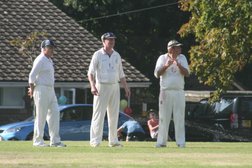 Firstly I would like to say a big thank you to Tim Normington who offered to score for the Nutters and Steve Sharp who offered to umpire the entire game for us as well, both from Henfield. Not only is it the best score card we have in the book but excellent consistent umpiring as well. Thank you from Nuthurst. If there is anyone willing to volunteer for physio, sports psychiatry, sports science and analysis that could also help on a Sunday along with a batting, fielding and bowling coach for next week that would be great!

On what was now a typically normal summers day where everyone's thoughts in the morning is what can I do inside this afternoon we got confirmation the game was on! On arriving at Ditchling memories of a tied game came flooding back from a few years ago, along with a sigh of relief the rainforest length football pitch outfield had been cut. Raggy winning the toss has inherited Captain Bob's mantra of fielding first.

The Ditchling opening pair were a couple of youthful big hitters and straight away got the scoreboard ticking with Graham Prior 1st over going for 10 and Raggy's for 8. The run rate was dragged back but both batters were set and happy to be aggressive. Graham eventually making the breakthrough getting the opener ct Raggy for 21 at mid off. Graham also picked up another wicket of number 3 bat lbw. Raggy also with two wickets removed the other opener with a second attempt catch in the deep by Jonny Willis. Wickets were hard to come by and runs were easy to get for Ditchling who had the ability to pick up easy singles throughout the innings. As the innings drew to a close wickets fell quicker with Willis bowling number 5 bat, a quick run out followed and Raggy claiming his second wicket towards the end. Ditchling finished on 186-5. There was an early declaration giving Nuthurst an extra 12 minutes to bat.

It wouldn't be Nuthurst without a few notes, primarily injuries to J Willis (multiple times I believe) and Trevor. At one point over a 3rd of the fielding area was covered by two people who could not walk let alone run!

Special mention to another up and coming cricketer through our colt system in Alexander who bowled 4 overs and could of had is 1st wicket for Nuthurst but Jonny attempting the catch picked up one of his injuries but it is great to see the Colts coming through and participating.

After tea Push and Guy opened the batting. It quickly became apparent that runs were by no means easy to acquire. The much more youthful and close in field made sure there were no easy singles and tight bowling throughout meant most attacking shots came with a higher degree of risk. Push was dismissed first which unfortunately for him meant being the runner for Jonny as the second of his injuries came from bowling and was unable to run. Guy was dismissed shortly after for 8. Jonny and Trevor hung around for a bit before Jonny was out and when Trevor joined him Nuthurst were 36-4 off 17 overs. It was becoming clear that with nothing being offered in terms of scoring, a very youthful field and accurate bowling, the draw seemed the best outcome for Nuthurst. Raggy now at the crease showed us another side to his game, patience. Raggy faced 94 deliveries in his 37no and in the middle order with Charlie South who faced 37 deliveries and David Thompson 22 deliveries took a lot of time out the game and really started to frustrate Ditchling. I think at some point every batsman was referred to as Geoff Boycott. But it was the Boycott innings that was winning the mental battle against Ditchling who after every ball bowled that wasn't attacked or took a wicket

was being greeted with chirping. Jonty and Graham went in to support Raggy in making sure we didn't lose. Just to add to the grey skies and turbulent air, due to the quick turnaround in overs the last 20 were bowled inside the hour meaning there was another over to face to now the challenge of Nuthurst who thought they had made it. With Raggy on Strike though there was no issue and Nuthurst maintained their unbeaten run.

It is just as good to be part of a game where there is an outcome regardless and sometimes winning isn't always the answer and you can feel better for it!