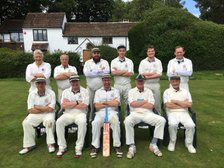 Yellow Stumps and Nuthurst take it to the wire……

There is always something special about playing mid week cricket matches. Some players will have had to book time off work, the fact it’s a work day brings a different feel. So on Thursday we welcomed the highly competitive team, Yellow Stumps CC.
Any team that has Mike Reynolds in their ranks is always going to provide a testing game, even if they are short of a couple of players.
Yellow Stumps batted first and a couple of early wickets from James Simpson saw them slump to 39 for 2, things became much tougher thereafter as Reynolds and Hornsby compiled a hundred partnership.
One of the features of the season has been the increasing participation of players from our junior ranks. Thursdays game was no exception with Charlotte Maclennan, Freddie Brown and Tristan Dauntsey playing. Charlotte bowled a really tight spell of 4 overs for 32. The end of Charlottes spell saw Freddie Brown enter the attack and with the final ball of a good 4 over spell he had the crucial wicket of Reynolds, falling to a sharply taken catch by David Thompson. Yellow Stumps finished up on 183 for 6.
The Nuthurst reply got off to a strong start with Rahul Jobanputra and Raggy Singh putting on 90 for the first wicket. However as is our fashion at times that strong early start was eroded by a steady fall of wickets, including Raggy falling for 94. 90 for 0 soon became 141 for 6. Enter Rich Holman, fresh from his 12 over stint. Some fine hitting saw Rich threaten to take the game and with 7 required off the last over he looked as if he had succeeded, sadly however a ball from Shoulders kept slightly low clean bowling him and the game finished as a highly entertaining draw with Nuthurst closing on 180 for 8.
This was an excellent advertisement for our local cricket, an entertaining game. It was great to see our youngsters play so well, Tristan deserves special mention for his ever improving fielding, he gets better with every game.
We look forward to welcoming Yellow Stumps back later in the season.
Share via
FacebookTwitter
https://www.pitchero.com/clubs
Recent news