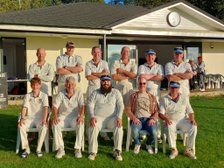 The journey of a thousand miles begins with a single step. - Lao Tzu, an ancient Chinese Philosopher.

So we end the 2021 season having started with Chippy achieving an amazing 1,000th wicket, seeing Raggy complete 1,000 runs in the season in the last game of the season.

How quickly the season has gone, one moment it’s July and tour, the next it’s September, early starts and the end of summer looms. End of season means CYPOS? (Can you play on Sunday?), at least for the last 12 years, although the fixture goes back at least 25 years.

An early shower thankfully passed saving us from a repeat of last weeks playing conditions! Of some note was Raggy winning the toss, once we overcame our shock we found that we were in the field.

There are some games where chances go begging, no catch seems to stick, the ball drops tantalisingly short, decisions don’t go your way and so it seemed on Sunday. A good opening partnership was threatening to take the game away, however this season has seen a focus from the Nutters that pulls games back. So it was on Sunday, after a decent, but wicketless opening spell from Rich and Jonty, Jezza and Raggy were quickly amongst the wickets and had it not been for the CYPOS? number 4, Siddioi (72 no) a relatively low target could have resulted. Not so, more chances missed and a tiring attack saw CYPOS? declaring on 191.

Nuthurst’s reply started in positive fashion some powerful hitting saw Rich scoring 15 off 10 deliveries and it was something of a surprise to see him edge behind. The quick loss of Nick saw Nuthurst tottering at 29 for 2. DT and Jonny set about restoring order and a partnership of 61, that included Jonny reaching 50, increased our hopes of victory. Having completed his 50, including a 6 that nearly broke the pavilion, Jonny spooned a catch to mid wicket.

At this point focus switched as Raggy went into bat. Having already exerted his parental control over his soon to be born son, Raggy was free to try and pass his personal landmark of 1,000 runs in the season. Nervous moments passed as it appeared that Raggy would get to his target in singles, finally the pressure was released as a well struck boundary took Raggy through to his target.

Almost immediately CYPOS? struck back, Raggy and DT fell and whilst they provided some resistance Darren and Charlie went cheaply. It was left to the ever improving Freddie Brown along with Jonty to ensure the draw.

So a throughly enjoyable season comes to an end. There was so much to reflect on: Chippy’s 1,000th wicket, Raggy’s 1,000 runs, Rahul’s destructive batting against Bolney, the amazingly consistent bowling of Jez and Jonty, DT’s excellent batting and the development of junior players, all of whom made such positive contributions through the season.

2021 has been a landmark season in building for the future, long may it continue.

Thank you to everyone that has contributed to the passion, the fun and the achievements this season.

Finally while writing this, delightful news, I am sure that you will all join me in congratulating Raggy and Bex’s on the birth of Lowen Nicholas Singh on Tuesday 28th September 2021.