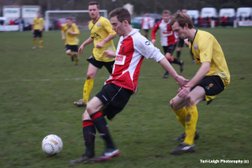 A decent crowd turned out to see the clash between two teams chasing promotion from the UCL Division One.

The first half was a very balanced affair, with both teams pressing hard to clinch that vital opening goal. Rushden came very close with some good runs from Newman, with his second attempt coming extremely close to putting the visitors ahead. Unluckily for them, despite a great run of play enabling him to beat Denham Hinds he was unable to get enough power behind the shot for it to have a credible threat on goal, with the ball just passing the left post. Hinds was already having a cracking game, having made two very good saves previously to keep the scores level.

Oadby too were having their share of goal opportunities, with a deflected shot from a corner making its way into the back of Rushden's net, however was disallowed. Olly Brown-Hill, who is developing into a very good attacking midfielder, also struck a lovely shot on target; albeit a little too on target and it went straight at the 'keeper. The well fought first half was looking to head into the break at 0-0 if were not for a superb goal from Jon Stevenson.

There are a few times a season when Stevenson has moments of real brilliance, and this was one; times when his experience in playing in the Premiership shine through. Football is quite a simple game and many, many individuals can run at pace for ninety minutes and kick a ball on target - it is the spatial awareness and abilities to see and take opportunities that separates the best from the rest, which is what happened here. Moments before half-time Stevenson belted a 25 yard screamer into the top corner of the Rushden goal. Unstoppable.

Oadby came out from the interval a lot more confident and quickly turned up the pressure on the away side. A bit of quasi-route one football resulted in a well timed cross from Jon Stevenson landing at the feet of Olly Brown-Hill who was able to exploit the large holes in the Rushden defence and slot home a simple goal. Two minutes later was an identical goal, just replace Michael Reeve and Nick Pollard for Stevenson and Brown-Hill. Not even ten minutes into the second half, The Poachers were 3-0 ahead.

Rushden still carried on and kept on pushing for a comeback, but conceding two goals so quickly would affect any team's morale and the shots lacked the same style witnessed in the half.

The introduction of The Diamond's star Alfie Taylor boosted the away side a little but fortune was raining upon South Leicestershire this afternoon and Elliot Wright drilled his shot home from the edge of the area, neatly placing it in the bottom corner, before a fifth goal was scored by Jon Stevenson.

Oadby threw away their chance of a clean sheet with the defence wanting; the closing minutes of the match and Alfie Taylor taking full advantage, as he exploded through Oadby's backline and smoothly ran around Hinds to dink the ball into the net.

A good performance from Oadby and it was nice to see so many AFC Rushden & Diamonds fan making the journey to Leicester, creating a great atmosphere for the match.

Speaking after the game, Jason White (1st Team Coach) rightly commented that there was still work to be done and Oadby need be producing more clean sheets in order to mount a sustainable challenge for promotion.