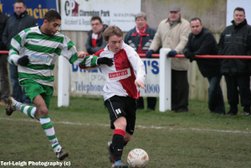 Oadby take the three points in a hard fought victory

Cold fingers, cold noses and cold toes; but very warm hearts thanks to a fantastic run of results to mark the start of 2013. However, the new year has not just brought with in a couple of comfortable wins for Oadby, but also some quite vile weather. Rain, cold winds and snow on the way; far from ideal conditions to maintain a heavily used football pitch in South Leicestershire.

The pitch was certainly a leveller, hindering Oadby's normal fluid passing play; the mud acting like a layer of glue across the surface. However, Oadby did manage to have a couple of very good chances in the first half with a thunderbolt from Jake Duffy somehow managing to crash and collide into the chest of a well placed Olney defender, who kept his ground and the ball pinging over the bar for a ungratifying corner.

The other major attempt came from a positive run from Michael Reeve, who lost his balance as he took his shot. Ball bouncing off the Olney 'keeper and falling to the feet of Mason Hirst, who looked rather unprepared for his chance to open the scoring. Nevertheless the raising Oadby Town star collected himself and went for glory, with the shot hitting a rolling, tumble-weed-style Reeve who was unable to get out of the way in time. With Olney defending well and having their fair share of attacks and possession the game was deadlocked heading into the break.

The second half was much more enjoyable for the home fans, Nick Pollard making an all important breakthrough eight minutes in to put Oadby ahead. The Poachers soon doubled their lead after the referee gave a controversial free-kick inside the Olney box. New signing Stefan Oakes took the kick and Jake Duffy finished it off from six-yards. Oadby fans relieved , visitors fuming.

Three minutes later Nick Pollard scoring his second of the game and virtually sealed victory for Oadby. Denhim Hinds once again pulling off some very fine (and brave) saves to ensure his clean sheet.

MOM: Nick Pollard, for his good workrate and continual running down of the ball and placing vital pressure on the Olney defence, constantly looking to force an error.