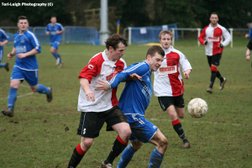 Oadby progress through to the semi-finals after a comfortable win at Thrapston...

From the outset of this match, Oadby looked in complete control, and it was not long before Jon Stevenson virtually confirmed The Poachers' place in the semi-finals within the first ten minutes.

Two well finished moves from Stevenson saw him banging the ball in the back of the net after seven and nine minutes respectively, but Oadby did not take their foot off the gas and continued to put pressure on the Thrapston defence, with Stevenson narrowly missing out on his chance to score a hat-trick. Michael Reeve had chances to opening his scoring account of 2013; however he seemed to have lost some of the confidence, that attributed to so much of his prowess last season, and was unable to land the ball on target.

One of the more pleasing sights of the match, other than watching Oadby roll over anther Northamptonshire side, was the introduction of Luke Dalby at right-back. Luke has been progressing well in the Youth Team this year, and seemed to seamlessly fit into the First team, linking up well with Jake Duffy and Jim Dodds.

Oadby’s midfield was looking strong with Stefan Oakes calmly controlling the middle of the pitch with some beautiful long passes and flicks, which allowed the visitors to exploit the flanks and really stretch the Thrapston defence.

An unfortunate dip in concentration led to Thrapston pulling a goal back in the twentieth minute, although even though this halved their goal deficit, in no way looked like the origins of a comeback.

Manager, Lee Harriman commented after the match that he thought the match was over as a contest after half-time, and it certainly seemed that way, but, just to make sure, Stevenson finally completed his hat-trick with a lovely goal just before the break.

The second half was much the same, with most of the traffic in the home
side’s half.

Elliot Wright ensured victory with a goal that challenges Mason Hurst’s Tuesday night effort for goal of the week.

Oadby head into the Semi-Final with a match against either St. Ives or Rushden & Higham. With The Poachers playing the way they are, this reporter can see the season’s second piece of silverware making its way to Freeway Park (hopefully to be followed by the league title!).