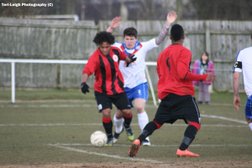 Away Days with Nick Doncaster; Oadby struggle against a 10 man Diamonds...

I cycled to the clubhouse of Oadby to catch the fully booked coach with all the Oadby Town family on board. We arrived at the Dog and Duck whereby half the coach piled into the pub and half headed straight for the ground. Since I last visited the ground in August, a new stand has been added behind the goal as you walk in. This is the Peter De Banke terrace and protects the cars behind from stray shots (my mate got his windscreen smashed, so a welcome addition). After the shock of paying £2 for a programme, I headed for the outside catering for a welcome cup of soup on a bitter day. The clubhouse and changing rooms are also in this corner. Down one side are the dug-outs; the far end is open and down the other side is the impressive main stand named after local celebrity Peter Ebdon which I was going to watch the game from but as there was a "cue" to get in, I thought I'd give it a "rest"... I was "snookered"!! In the corner between this stand and the Peter De Banke terrace is Dale's Bar, a lovely little place dedicated to ex-goalkeeper Dale Roberts who sadly took his own life. A nice touch.

Oadby, attacking towards the open end which housed "The Choir" seemed to struggle on the sandy, bobbly pitch to keep their footing but after 10 minutes the game exploded into life when Michael Reeve, in on goal, was hauled down by the no.6 who was sent off for being the last man and Jon Stevenson scored from the spot to send the travelling fans wild.

This seemed to inspire the home side who had a couple of off target shots and then moments after Callum Earls had wound up the home fans with a wrongly placed free kick,the Diamonds equalised after a shot across the goal was slammed into the roof of the net at the back post.

Stefan Oakes then had a free-kick saved, Rushden shaved the bar and Stevo had a chance as the half ended.

Five minutes into the second half Stef went off with an injury and was replaced by Che Adams. Five minutes later Olly Brown-Hill was fouled on the edge of the box and Stevo took the free-kick which the keeper seemed to have covered but he made a right hash of it and the ball ended up in the back of the net.

In fact he wasn't having the best of games and we really should have tested him more. Olly then had a shot which went wide followed by Rushden equalising with an absolute screamer... a worldy... from 30 yards.

2-2.I was gutted.He could have tried that 100 times and 99 times he would have put it in the field behind.

My frustration soon went as the Rushden fans sang to us... "2-0 and you messed it up" (or words to that effect)... WE WERE NEVER 2-0 UP YOU IDIOTS!!!!!! The game then petered out, both sets of fans being nervously quiet for the only time in the match. Jim Dodds produced a great last ditch tackle to keep the scores level and The Poachers headed home with the point that most fans would have taken at the start of the game. For the first time this season the travelling Oadby fans were heavily outnumbered but did the club proud.

Man of the Match;No-one really stood out but Stevo gets the nod for his two goals.