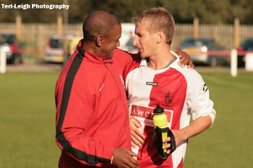 Away Days with Nick Doncaster...

On Monday night Oadby arrived at Harrowby United for our second visit of the season to Lincolnshire.

I travelled from Peterborough by car and drove through Grantham town centre to find the ground on the edge of a housing estate. You enter in the corner near the clubhouse, changing rooms and canteen kiosk. The rest of the side is open with the dug-outs on the halfway line. On the opposite side is "Stan's Stand"; a medium sized black and red structure with wooden steps and plastic rail seats. In fact most of the ground is painted black and red, probably quite recently as everywhere you look has had a lick of paint. One end is overlooked by houses and the other had a school playing field behind it.

Oadby,in all orange (probably due to washing deadlines on the blue kit) made 4 changes from the Rushden game, which were needed as we looked "up for it" tonight. Almost straight from the kick-off, Kris Stevenson went in, hard but fair on a Harrowby player, right in front of the dug-outs, causing the ref to have a word in his ear. A few minutes later, brother Jon Stevenson limped out of the game with a calf injury being replaced by Ollie Brown-Hill. The "Arrows" had the first shot of the game but Oadby took the lead after Che Adam ran into the box,got to the byline but was bundled to the floor. With players and fans appealing, the ref consulted his linesman and gave the penalty. Olly coolly stepped up to send the keeper the wrong way. 0-1. Eight minutes later and with Oadby looking like themselves again... good movement, slick passing... Kris Stevo squared for Callum Earls to double our lead from 10 yards. 0-2. Both teams played some good football leading up to the break on another hard surface. Joe Darlington was booked for a mis-timed tackle.

After an interval break watching Manchester United wrap up a 20th title (it must be so dull, winning all the time... where's the highs and lows of following Derby County/Oadby Town??)... it was game on as Harrowby equalised at the start of the second half. Luke Dalby, in my opinion, won the ball on the edge of the box, but the referee seemed to react from the home bench and gave the free-kick... and wouldn't you know it... scored with a slight deflection. 1-2. After 20 minutes, Joe Darlo was fouled just outside the box and Callum curled the free kick just over.With the home side really going for it, Jim Dodds was marshalling the troops superbly and stood up to everything they threw at us. They did have one really good chance but seemed like they tried to walk it into the net. Joe Darlo was replaced by Rob Morgan, who after playing at right-back on Saturday was back in midfield where he looks more comfortable. Oadby did have a couple more chances to increase their lead, Olly producing a deft chip which the keeper got a hand to. Kris Stevo was booked as we saw out the final minutes of the game,to get us back to winning ways. The work rate was back to normal tonight... Joe Darlington continues to impress at right-back... Zac Winstone looks strong but Man of the Match goes to Jim Dodds... a rock in defence tonight.