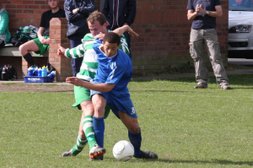 Away Days with Nick Doncaster...

D-Day for both The Poachers and Leicester City. Unbelievably as I travelled to Buckinghamshire in the car, the Foxes managed to crawl into the final play-off spot. In the car park at Olney a few Oadby fans gathered round to hear the final moments on Radio Leicester. I know I'm a Derby fan but it's great news for my home town if The Foxes can get promotion. Buoyed by this news, it was our turn to do the business and hope that Northampton Spencer could do us a favour.

Rather like Northampton ON Chenecks there is no paid admission... a man goes round with a collection box as they can't charge as it's a public park. There is a small terraced stand with dug-outs built in on the half way line and behind one goal are the changing rooms and clubhouse with cricket and rugby pitches, a bowling green and kids playground also.The other two sides are open with a walkway from East Street to the park being constantly used. The pitch is roped-in, all the way around. Oadby in all blue kicked off towards the changing rooms and for the first 15 minutes the game didn't really settle down. Olney had a free header which went wide and Mason Hirst tried a dipping shot before a ball was played through the Nurseryman defence and in a collision of defenders and keeper Jake Duffy prodded the ball goalwards and over the line... Levi Ramsey could have made sure but graciously let Jake have the goal. 0-1.

Within a minute we went further ahead as Levi cut in from the right and scored with a low shot into the corner. 0-2. An Olney player was booked for pushing him in the face and then he had 3 more good chances to put the game to bed with 2 headers and a shot just before half time. 0-2.

Did news filtering through that Rushden & Diamonds were winning affect our performance as we were woeful in the second half. The game changed on a bizarre incident after 12 minutes... Denham Hinds seemed confused after taking a kick from a previous Olney offside, only for the ref and linesman to tell him to take it from different places... the subsequent booking seemed extremely harsh. It was a farcical situation which seemed to upset both sets of players, forcing the game to become dirty... a situation the ref had totally brought upon himself.Two minutes later a (yet another) long ball over the defence,caught us out and Olney pulled a goal back. 1-2. Four minutes later a totally different looking Olney side equalised. 2-2. Kris Stevenson was replaced by Rob Morgan. Levi was elbowed in the face... an incident that went unpunished... and then a penalty was given at the far end... a decision which mystified me and the Olney keeper at the other end... which was put into the top corner for a 3-2 lead. Olly Brown Hill,who was very quiet today was replaced by Callum Earls and 5 minutes from time the Duffmeister was booked for dissent at an Oadby free kick... again by the ref causing confusion. Olney celebrated at the end as if they'd won the league which just goes to show what a scalp we are. Final Score;Olney Town 3 Oadby Town 2.

With Diamonds winning anyway our fate was sealed but if we can finish third you never know what will happen in the summer with league re-organisation.

Man of the Match was Levi Ramsey for a great first half and for being hard to play against with 2 men on him most of the time.