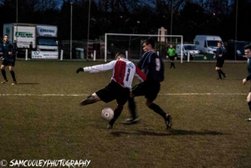 After a dire start, Oadby turn on the style to see off Rothwell...

Just like on Easter Monday, Oadby had a poor start, which cost them dearly in the first half; a lapse in concentration from the home defence saw Rothwell’s Ian Hay opening the scoring after only five minutes.

The next twenty minutes did not see an improvement, sloppy passing and, although there were a couple of new faces to the side, a performance that looked as if they team had never played together before, and certainly not a team looking to win the division. However, towards the end of the half Oadby looked to get into a more comfortable rhythm with Jon Stevenson having a good opportunity to level the score, only to be denied by the Rothwell ‘keeper.

One fan commented during the break that it was “squeaky bum time”, and this would be a fair assessment, as The Poachers seemed unable to take enough control of the match to earn a win.

As the cliché goes “it’s a game of two halfs”, and that was certainly true of this match. Jake Duffy came on and Oadby looked more like the confident team the supporters have been watching all season. The entire team appeared to snap into action, with Jon Stevenson dominating the midfield and Luke Dalby creating some great work down the right wing.

It was a mere three minutes until a rebound landed at the feet of Ollie Brown-Hill, who slammed the ball into the left of the visitors net and level the scores.

The game was now over as a contest. Rothwell looked tired and The Poachers cooly passed the ball around and the now jubilant fans were just waiting for that winning goal to come, which was provided once again by Ollie Brown-Hill just after the hour mark.

In a Division where it is extremely tight at the top of the table, in which if Oadby were to lose another game this season, the title may be decided by goal difference, it was encouraging to see the players not drop their game and sit back for the three points. Oadby kept possession of the ball, with only the odd long-ball effort able to enter the home half.

Last week the match report praised the groundsman for his efforts on the pitch, this week we remark on his maintenance of the netting, as Che Adam’s power drive of a shot into the top-right corner, leaving Rothwell no chance of stopping it, surely tested the stitching!

There was no stopping the home side now, as the mounted attack, after attack, after attack on the struggling visitors. Stevenson finally managed to grab a goal with a well-placed shot in the bottom left and then Callum Earls joined in the fun a minute into added time.

This was certainly a much improve performance on the Easter Weekend, which is encouraging with a League Cup Semi-Final against St. Ives next week.