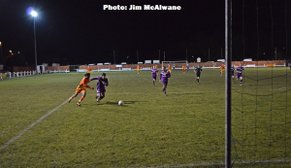 Oadby through to the semi-finals of the Westerby Cup...

The Poachers claimed their fourth higher grade scalp of the season as they moved into the last four of the Westerby Cup.

The game was at a stalemate in the first half as the sides went into the break with neither side managing score. Thankfully for Oadby this all changed in the second half with Callum Earls putting Oadby ahead on the hour.

Although Oadby looked in control of the second half, Loughborough were very keen to level the scores and right until the end kept on making threatening counter attacks into the home half.

The Poachers' win was finally sealed by top scorer Courtney Meade three minutes from time to the joy of the crowd, and secured their place in the semi-final, which is due to be played at the home of the Leicestershire FA - Holmes Park.