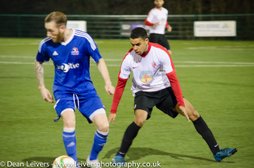 Yaxley eventually progressed comfortably to the League Cup semi-finals with this victory over Oadby but the visitors put up a tough fight before collapsing in the final quarter. Yaxley had the better of the first half but chances were rare for either side. Liam Hook went close early on for Yaxley while a mistake from Joe Butterworth after 27 minutes gave Callum Armsden a shooting opportunity but Simon Dalton in the Yaxley goal was equal to it. A Jack Saunders shot was rather fumbled for a corner by Oadby keeper Adam Fletcher-Warrington. This led to a succession of corners and goalmouth scrambles before the ball was half cleared to Rob Hughes who calmly lifted a shot over a mass of players in front of him and the goalkeeper to open the scoring after 40 minutes.

The second half started in similar vein with the young Oadby side battling hard to keep Yaxley at bay. Yaxley made it 2-0 after 65 minutes with the best move of the match. Hughes found Jack Saunders who laid the ball out to Phil Stebbing on the left. Stebbing beat his marker and broke into the penalty area before producing a perfect pull back for Hughes to score his second. Oadby had an opportunity to pull one back three minutes later when a defensive error allowed Nuno Gomes a run from the halfway line but his control let him down as he approached the area allowing Dalton to make a brave save. From then it was all Yaxley. Hughes completed his hat trick with a stunning quick free kick from 40 yards which lobbed the out-of-position Fletcher-Warrington after 70 minutes. A minute later Stebbing had a shot parried from a corner but Saunders scored from the rebound to make it 4-0. Ten minutes from time Liam Hook beat the offside trap to make it 5-0. With five minutes left substitutes Charlie Saunders and Matt Sparrow combined for Sparrow to net only to be denied by the assistant’s flag but Sparrow wasn’t to be denied a goal as a minute from time he turned in a Liam Hook cross from the right.

Yaxley will face Olney Town in the semi-final.