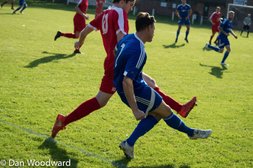 Oadby Town’s winning streak came to an end this afternoon as visitors Yaxley beat the Poachers 3-1 at Freeway Park to extend their own winning run to six games. Yaxley opened the scoring early on before doubling their lead just before the hour mark. Oadby pulled one back from the penalty spot to give them a lifeline with 15 minutes to go but Yaxley secured victory themselves from 12 yards soon after in front of a crowd of 122 spectators, who helped to create a friendly and enthusiastic atmosphere.

After an electric start, Yaxley took a deserved lead after just five minutes. A corner, conceded by Lynas King who came off injured after 33 minutes, was taken short by the Cuckoos’ influential captain Daniel Cotton to the equally as effective Robert Hughes. Hughes returned the ball to Cotton who played the ball into Charley Sanders. Sanders’ lay off set the ball up for Cotton whose powerful strike was beyond Oadby goalkeeper Adam Fletcher-Warrington before he could see it.

Despite going behind early on, the home side got back into it and matched their opponents for the remainder of the half, and were unlucky not to go into the interval level as the hardworking Carlton Beardmore headed just beyond the far post in Oadby’s first genuine attempt at goal. However, Yaxley should certainly have doubled their lead when Zlatan Ibrahimovic’s lookalike Sanders fired over the crossbar when through on goal.

In what turned out to be a feisty second half, Oadby were the stronger side and were unfortunate not to equalise, with forward trio Beardmore, Callum Steer and Sam Burton all causing trouble to the Yaxley back line, which started as a three-man composition before switching to a back four part way through the second period.

As the hour mark approached, though, Oadby fell two behind as a long, cross-field ball was not dealt with by left-back Lewis McLean, who was brutally punished by the phenomenal Hughes, who slotted past Fletcher-Warrington.
The Poachers did not let their heads drop though, and neither did their supporters, as they continued to push and press to try and claim something from the game. This opportunity was presented to Oadby with quarter of an hour remaining when referee Matthew Paul pointed to the spot after Beardmore was bundled to the ground after battling down the left channel. Burton stepped up and confidently rolled the ball home to half the deficit.

However, just four minutes later, Paul again awarded a penalty, but this time at the opposite end as Yaxley’s corner into the box led to some seemingly innocuous contact in the box. Cotton took the penalty and emphatically fired his shot into the top of the net to the goalkeeper’s right as Fletcher-Warrington dived left, sealing the points for the away side.
After a flurry of quick-fire yellow cards and some more half chances for both sides, Paul brought the game to a close after Beardmore volleyed over deep into injury time.

Oadby Town can count themselves a little unlucky following a 3-1 defeat because they did play some good football. If some of their chances had fallen slightly better and they hadn’t come up against an inspired goalkeeper for the Cuckoos in Aaron Butcher, it may have been a different story and could have at least claimed a point, maybe even all three.
The result means that Oadby remain on 12 points so far this season, with Yaxley moving onto 27, with both playing 13 games thus far. The final word for Oadby Town, though, must go to the tireless captain Ethan Bibby, who was by far the home side’s man of the match and certainly did not deserve to be on the losing side.