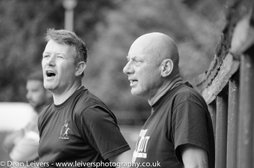 Deeping ran riot after an early shock to demolish their youthful visitors.

Rangers responded with a powerful display of attacking football which swept away the Poachers.

Scott Mooney squared the game after 17 minutes and then put his side ahead eleven minutes later.

The home tally was doubled by the break with Dan Schiavi scoring a third Deeping goal after 34 minutes and Scott Coupland making it four on 43 minutes.

There was no Rangers let up on resumption with Coupland again on target in the first minute of the second period.

Jason Kilbride joined the spree a minute past the hour mark and late goals from Jonny Clay on 87 minutes and Will Bird a minute later added gloss to the scoreline.